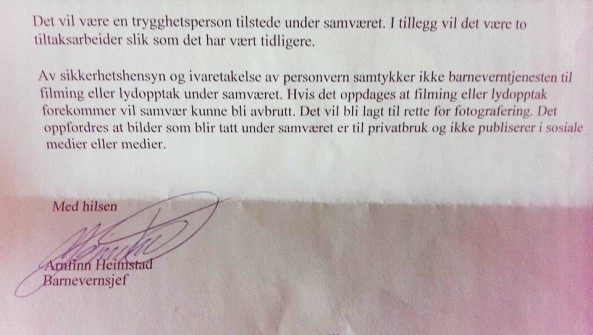 The above letter was sent from Barnevernet to the family of baby Aria. Baby Aria was confiscated soon after her birth without any wrongdoing by the parents who have been fighting for the past 16 months to bring her home.

The letter states the following:

For security reasons, and the safeguarding of privacy, consent is not given by the child welfare services ( barnevernet ) for Filming or audio recording, if this occurs the visitation could be canceled. There will be given opportunity for photography, it is encouraged that the photos taken during the visit are for private use and not to be published in social media.

This is further evidence of intimidation and suppression of freedom of expression by Barnevernet. The system is very sensitive about social media since sites like Facebook have become an effective battle ground against it. The victims now have a voice on the international stage. Various political bodies in Europe are monitoring what goes on in social media, and the human rights violations have not gone unnoticed.

Barnevernet is in survival mode. It is in self-preservation mode. As a result it lashes out against victims to further suppress their rights while threatening to take away visitations. This is cruel and inhumane.

We continue to support the family of Aria, the Bodnarius, the Nans and the rest of the victims in this public fight against the government of Norway.

All material authored by Delight in Truth may be reblogged and re-posted with reference and link to the site of origin.
Loading Comments...
%d bloggers like this: