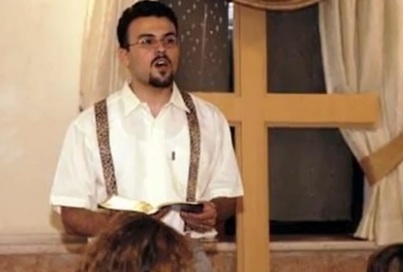 That is what pastor Saeed Abedini is refusing to do in an Iranian prison where he is sentenced for at least 8 years after being convicted of evangelism in a sham trial.

He recently wrote this letter about what his tormentors are telling him:

““Deny your faith in Jesus Christ and return to Islam or else you will not be released from prison. We will make sure you are kept here even after your 8 year sentence is finished.” These are the threats that prison officials throw at me.

My response to them is Romans 8:35-39. The reality of Christian living is that difficulties or problems do arise in our lives. Persecution and difficulties are not new occurrences, but are seen often in the Christian life. It is through the suffering and tribulations that we are to enter the Kingdom of God.”

He has suffered physical and emotional torture so far, but this letter shows that he is spiritually strong.

He is a well-known case because he was arrested there while visiting Iran from the US, but there are countless Christians like him in prison in Iran for their faith. It is impossible to know the real statistics on this due to the secretive and manipulative Islamic regime in that country.

When we are persecuted intellectually or emotionally for our faith in Christ right here in America, when we are called bigots for believing in the exclusivity of salvation through Jesus and for standing on biblical principles, we must remember our brothers who also suffer physically for Christ.

There are many martyrs across the globe suffering and dying for Christ. We don’t know of them, but God knows them. He has prepared for them a special crown after they have finished running the race.

Continue to keep Christians like Saeed in prayer so that their faith will remain strong.

3 comments on ““Deny Christ… and Return to Islam””