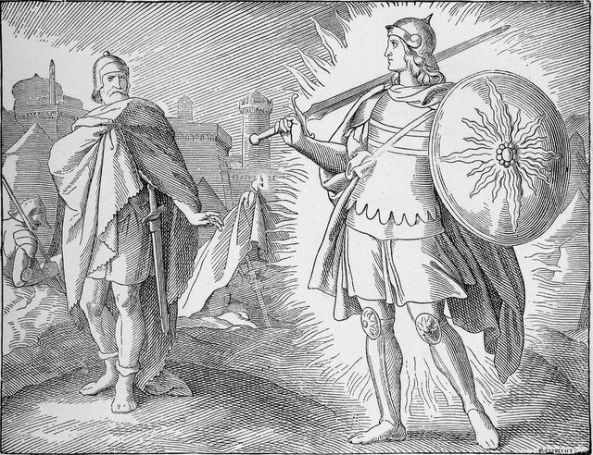 The people of Israel have just entered Canaan and have celebrated their first Passover there.  The manna from heaven has just ceased to come down.  God has just decreed to Joshua that “Every place that the sole of your foot will tread upon I have given to you” and “No man shall be able to stand before you all the days of your life” Joshua 1:3,5.

Joshua is about to undergo the first military conflict in the promised land (now this is where our modern atheist and agnostic moral relativists interject to accuse God of sanctioning war crimes and atrocities against the ancient Canaanites… more on this later).

As Joshua is getting ready to besiege Jericho, the crown jewel of Canaan, a mysterious yet awesome Person appears to Joshua:

Joshua 5:13 “When Joshua was by Jericho, he lifted up his eyes and looked, and behold, a man was standing before him with his drawn sword in his hand. And Joshua went to him and said to him, “Are you for us, or for our adversaries?”

This marks the beginning of a great mystery.  Joshua does not know who he is.  He is clearly a warrior of great stature as Joshua looks up to see him with his sword drawn.  Previously commanded by God to “be strong and courageous” Joshua now inquires if he is one of “us” or one of “our adversaries.”

Surprisingly the mysterious Person answers “No” to the two possibilities presented by Joshua (one of us or one of them):

Many commentaries (but not all) ascribe the title of “commander of the army of the LORD” to Christ in this passage. Lets look at the textual evidence pointing towards this Person being the Christ.

15 “And the commander of the LORD’s army said to Joshua, “Take off your sandals from your feet, for the place where you are standing is holy.” And Joshua did so.”

In light of Revelation 19 where Jesus, “The Word of God” commands the heavenly armies we interpret that the divine Person appearing to Joshua is none other than the pre-incarnate Christ.

It is a crucial moment where Joshua receives not only approval from God, but the impetus to boldly engage in a war against Canaanites which is to include genocide and infanticide upon their tribes.

Why would God command Joshua to commit such atrocities against women and children in ancient Canaan?

5 comments on “The Commander of the LORD’s Army”